A Vascular Malformation is an abnormal collection or tangle of blood vessels. The malformations restrict or alter blood flow and are associated with the degeneration of neurons.

In Arteriovenous Malformations (AVMs), arteries, which supply oxygen-rich blood to tissue, are directly interconnected with veins, which move oxygen-depleted blood back to the heart and lungs.

The capillaries, the tiny vessels that deliver oxygen to cells and usually separate arteries from veins, are absent. Malformations with such artery-to-vein connections are called arteriovenous malformations (AVMs).

When an AVM occurs in the dura matter, the thick, leathery covering that surrounds the brain, they are known as dural AVMs.

Dural AVMs, unlike most cerebral AVMs, are not thought to be genetic in origin. Rather, they appear to be acquired as a result of trauma, infection, or surgery.

They often occur when a portion of the circulatory system in the brain becomes obstructed with a thrombus (blood clot) and the body grows new blood vessels to bypass the area. This process, known as revascularization, can lead to the development of AVMs.

The symptoms of dural AVMs include

Angiography, which provides an image of the blood flow in the brain, is the most important diagnostic tool for dural AVMs; it provides important information about both the location and structure of the malformation.

Some dural AVMs – those that do not cause symptoms and do not appear likely to hemorrhage– can be monitored without treatment.

The current treatment of choice for dural AVMs is endovascular embolization, which involves the insertion of a catheter, or tube, through an artery in the groin. The tube is guided through the circulatory system to the site of the dural AVM, where it delivers a kind of “glue” that embolizes, or blocks, the malformation to bypass it and restore normal circulation.

After embolization, the microsurgical resection of the dural AVM, in which surgeons remove the abnormal vessels, may be more successful.

In cases in which the risk of hemorrhage is high, or in which the catheter cannot reach the AVM, treatment may involve only surgical resection.

Stereotactic Radiosurgery also may be used in specific cases.

Dural AVMs are complex lesions, and should be addressed at major centers with experts experienced in their treatment. 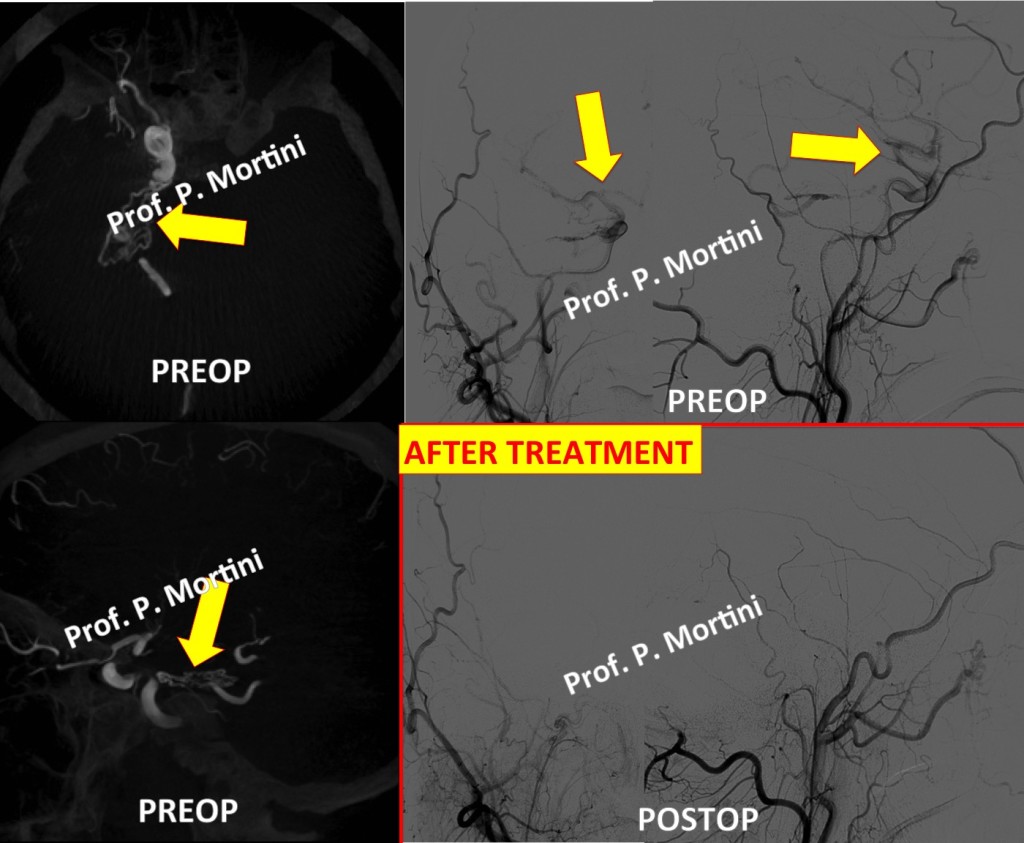