A cerebral aneurysm (also called an intracranial aneurysm or brain aneurysm) is a bulging, weakened area in the wall of an artery in the brain, resulting in an abnormal widening or ballooning.

Because there is a weakened spot in the artery wall, there is a risk for rupture (bursting) of the aneurysm.

A cerebral aneurysm generally occurs in an artery located in the front part of the brain which supplies oxygen-rich blood to the brain tissue.

A normal artery wall is made up of three layers. The aneurysm wall is thin and weak because of an abnormal loss or absence of the muscular layer of the artery wall, leaving only two layers.

Most cerebral aneurysms (90 percent) are present without any symptoms and are small in size (less than 10 millimeters, or less than one half of an inch, in diameter). Smaller aneurysms may have a lower risk of rupture.

Although a cerebral aneurysm may be present without symptoms, the most common initial symptom of a cerebral saccular aneurysm is a subarachnoid hemorrhage (SAH).

SAH is bleeding into the subarachnoid space (the space between the brain and the membranes that cover the brain). A ruptured cerebral saccular aneurysm is the most common cause (80 percent) of SAH. SAH is a medical emergency and may be the cause of a hemorrhagic (bleeding) stroke.

Hemorrhagic strokes occur when a blood vessel that supplies the brain ruptures and bleeds. When an artery bleeds into the brain, the brain cells and tissues do not receive oxygen and nutrients.

In addition, pressure builds up in surrounding tissues, and irritation and swelling occurs. About 20 percent of strokes are caused by hemorrhagic bleeding.

What causes a cerebral aneurysm?

Currently, the cause of cerebral aneurysms is not clearly understood. The formation of cerebral saccular aneurysms has been associated with predominantly two factors:

the effects of pressure from the pulsations of blood being pumped forward through the arteries in the brain.

Certain locations of an aneurysm may create greater pressure on the aneurysm such as at a bifurcation (where the artery divides).

The forming of a cerebral aneurysm has also been linked to risk factors that are inherited or may develop later in life (acquired risk factors).

Inherited risk factors associated with aneurysm formation may include, but are not limited to, the following:

• alpha-glucosidase deficiency – a complete or partial deficiency of the lysosomal enzyme, alpha-glucosidase. This enzyme is necessary to break down glycogen and to convert it into glucose.
• alpha 1-antitrypsin deficiency – a hereditary disease that may lead to hepatitis and cirrhosis of the liver or emphysema of the lungs
• arteriovenous malformation (AVM) – an abnormal connection between an artery and a vein
• coarctation of the aorta – a narrowing of the aorta (the main artery coming from the heart)
• Ehlers-Danlos syndrome – a connective tissue disorder (less common)
• family history of aneurysms
• female gender
• fibromuscular dysplasia – an arterial disease, cause unknown, that most often affects the medium and large arteries of young to middle-aged women
• hereditary hemorrhagic telangiectasia – a genetic disorder of the blood vessels in which there is a tendency to form blood vessels that lack capillaries between an artery and a vein
• Klinefelter syndrome – a genetic condition in men in which an extra X sex chromosome is present
• Noonan’s syndrome – a genetic disorder that causes abnormal development of many parts and systems of the body
• Polycystic kidney disease (PCKD) – a genetic disorder characterized by the growth of numerous cysts filled with fluid in the kidneys. PCKD is the most common medical disease associated with saccular aneurysms.
• tuberous sclerosis – a type of neurocutaneous syndrome that can cause tumors to grow inside the brain, spinal cord, organs, skin, and skeletal bones

Acquired risk factors associated with aneurysm formation may include, but are not limited to, the following:

• age (greater than 40 years of age)
• alcohol consumption (especially binge drinking)
• atherosclerosis – a build-up of plaque (made up of deposits of fatty substances, cholesterol, cellular waste products, calcium, and fibrin) in the inner lining of an artery
• current cigarette smoking
• use of illicit drugs such as cocaine or amphetamine
• hypertension (high blood pressure)
• trauma (injury) to the head
• infection

Although these risk factors increase a person’s risk, they do not necessarily cause the disease.

The presence of a cerebral aneurysm may not be known until the time of rupture. However, occasionally there may be symptoms that occur prior to an actual rupture due to a small amount of blood that may leak, called “warning leaks,” into the brain.

The symptoms of an unruptured cerebral aneurysm include, but are not limited to, the following:

The first evidence of a cerebral aneurysm may be a subarachnoid hemorrhage (SAH), due to rupture of the aneurysm.

Symptoms that may occur at the time of SAH include, but are not limited to, the following:

• initial sign – rapid onset of “worst headache ever in my life”
• stiff neck
• nausea and vomiting
• changes in mental status, such as drowsiness
• pain in specific areas, such as the eyes
• dilated pupils
• loss of consciousness
• hypertension (high blood pressure)
• motor deficits (loss of balance or coordination)
• photophobia (sensitivity to light)
• back or leg pain
• cranial nerve deficits (problems with certain functions of the eyes, nose, tongue, and/or ears that are controlled by one or more of the 12 cranial nerves)

The symptoms of a cerebral aneurysm may resemble other problems or medical conditions. Always consult your physician for a diagnosis.

How is a cerebral aneurysm diagnosed?

A cerebral aneurysm is often discovered after it has ruptured or by chance during diagnostic examinations such as Computed Tomography (CT scan), Magnetic Resonance Imaging (MRI), or Angiography that are being done for other conditions.

In addition to a complete medical history and physical examination, diagnostic procedures for a cerebral aneurysm may include:

What is the treatment for cerebral aneurysm?

Specific treatment for a cerebral aneurysm will be determined by your physician based on:

• your age, overall health, and medical history
• extent of the condition
• your signs and symptoms
• your tolerance for specific medications, procedures, or therapies
• expectations for the course of the condition

The main concern is to decrease the risk of a subarachnoid hemorrhage, either initially or from a repeated episode of bleeding.
Many factors are considered when making treatment decisions for a cerebral aneurysm: the size and location of the aneurysm, the presence or absence of symptoms, the patient’s age and medical condition, and the presence or absence of other risk factors for aneurysm rupture are considered.

In some cases, the aneurysm may not be treated but the patient will be closely followed by a physician. In other cases, surgical treatment may be indicated.

There are two primary surgical treatments for a cerebral aneurysm:

This procedure involves the surgical removal of part of the skull. The surgeon exposes the aneurysm and places a metal clip across the neck of the aneurysm to prevent blood flow into the aneurysm sac. Once the clipping is completed, the skull is sutured back together.

Endovascular coiling is a minimally invasive technique, which means an incision in the skull is not required to treat the cerebral aneurysm.

A catheter is advanced from a blood vessel in the groin up into the blood vessels in the brain. Fluoroscopy (a special type of x-ray, similar to an x-ray “movie”) will be used to assist in advancing the catheter to the head and into the aneurysm. 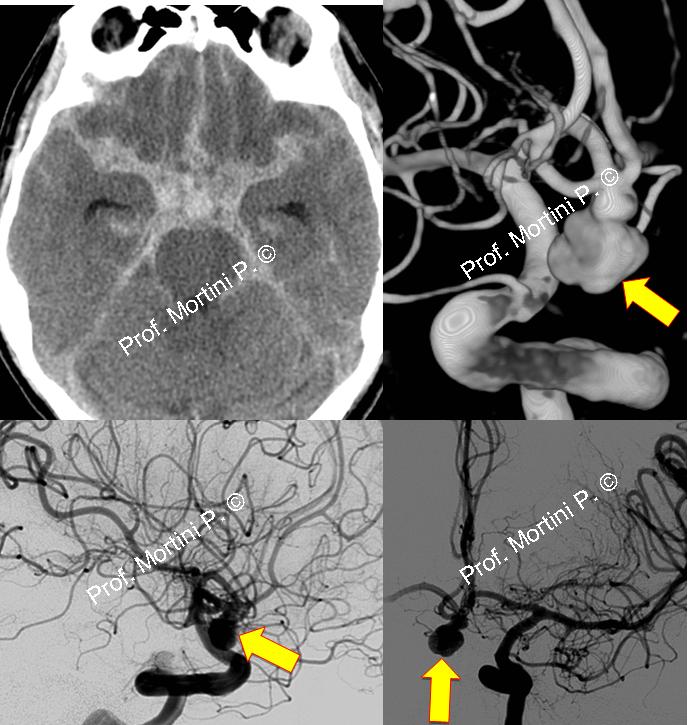