Developmental cysts of the brain, or arachnoid cysts, cause symptoms based upon the location and size of the cyst.

are common symptoms of intracranial arachnoid cysts. Most common locations include the temporal fossa, the posterior fossa, and the suprasellar region.

Arachnoid cysts are cerebrospinal fluid-filled sacs that may develop between the surface of the brain and the cranial base or on the arachnoid membrane — one of the three membranes that cover the brain and the spinal cord.

Arachnoid cysts occur mostly in males. Most cases begin during infancy but onset may be delayed until adolescence.

Untreated, arachnoid cysts may cause permanent severe neurological damage due to the progressive expansion of the cyst(s), hydrocephalus or hemorrhage (bleeding). With treatment, most individuals with arachnoid cysts do well.

Symptoms of an arachnoid cyst depend on the cyst size and location. Small cysts are usually asymptomatic and are discovered only incidentally. Large cysts may cause cranial deformation or macrocephaly (enlargement of the head), producing such symptoms as:

Treatment for arachnoid cysts is symptomatic.

• When symptoms warrant, the surgical placement of a permanent drainage system (cystoperitoneal shunt) to remove pressure from the cyst may be required. Shunt placement is appealing due to the simplicity of the operation.

• Alternatively, an open surgical procedure to fenestrate the walls of the cyst may be performed. Cyst fenestration is typically favored due to the high success rate of this procedure.

• Endoscopic cyst fenestration is a technique that couples the minimally invasive benefits of shunting with the advantage of open fenestration by avoiding shunt implantation. It is the procedure of choice in most instances of the arachnoid cysts seen. 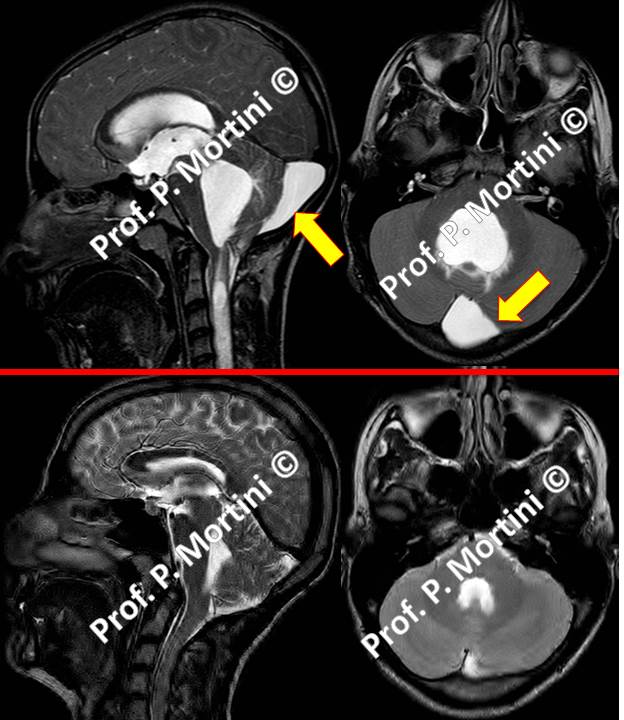