The spinal cord begins at the base of the brain and continues through the bony canal of the cervical (neck) and thoracic (chest) portions of the spine to end in the upper region of the lumbar (lower) spine as a bundle of individual nerve fibers.

The clinical syndrome that results from a disorder in the spinal cord that disrupts or interrupts the normal transmission of the neural signals is called a “myelopathy”. For anatomical reasons, cervical myelopathy may involve the arms and hands, legs, and bowel and bladder function.

There are many causes of cervical myelopathy; anything that interrupts the normal flow of neural impulses through the spinal cord may cause a clinical myelopathy.

Some of the causes are

It is the last group of causes that are of particular significance to the neurosurgeon or spinal surgeon. Cervical myelopathy secondary to degeneration is called “cervical spondylotic myelopathy” to indicate that spondylosis is the root cause of the syndrome.

The spinal canal is an enclosed bony tube through which the spinal cord runs. There are generally a few millimeters of fluid-filled space surrounding the spinal cord, which helps to protect it from trauma and allows for the considerable flexibility of the neck. Some people, however, are born with a smaller-than-average spinal canal; this is called “congenital cervical spinal stenosis”. Stenosis is a general term for narrowing.

The symptoms of cervical myelopathy depend on the level(s) of the spinal cord that are involved and the pattern of the involvement.

Neck pain may also be present but is frequently not a significant complaint.

The clinical diagnosis of cervical spondylotic myelopathy can be difficult because of the multiple potential causes of similar symptoms and the variable presentations.

Ultimately the diagnosis is usually made based on the patient’s history and examination and radiographic studies that confirm critical cervical stenosis with compression of the spinal cord.

Post-myelography Computed Tomography (myelo-CT) or Magnetic Resonance Imaging (MRI) may be used to obtained high-resolution images of the cervical spinal canal and the spinal cord.

The presence of significant compromise of the spinal canal with pressure on the spinal cord in an appropriate location to explain a patient’s symptoms is generally sufficient to make the diagnosis of cervical spondylotic myelopathy.

The key to the treatment of cervical spondylotic myelopathy is to remove the pressure from the spinal cord. The surgery is performed to prevent the progression of symptoms; clinical improvement may or may not occur. You will need to discuss your prognosis with your Neurosurgeon prior to making a decision to have surgery.

Surgical procedures to decompress the spinal cord include approaches

The exact procedure performed is based partly on the location of the stenosis and the overall alignment of the cervical spine, but many factors are considered in the decision. 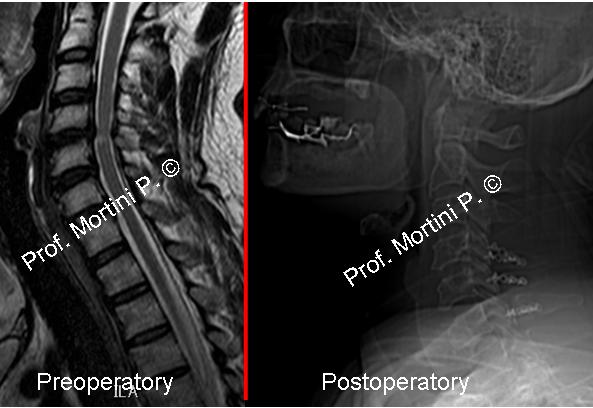