Chordomas and Chondrosarcomas are tumors that arise from developmental cells that are misplaced during development.

Although they arise from different kinds of cells, they often occur in the same region (near the base of the skull), resembling each other in imaging tests, and possibly causing the same symptoms.

Chordomas develop from remnants of the notochord, a structure that appears in embryonic stages and guides the growth of the bony skull and spine.

Normally, notochord remnants form part of the intervertebral discs. A chordoma occurs when additional notochord cells are enclosed by the developing bones.

These rare tumors are slow-growing and benign, but they may invade nearby structures, tend to recur after treatment, can destroy surrounding tissue, and may spread to other parts of the body.

Chondrosarcomas, which are even rarer than chordomas, are tumors of the cartilage that the skull replaces during development, although their exact origin is unclear. Most of these tumors are slow-growing, although in rare cases they can be aggressive and malignant.

Chordomas and chondrosarcomas often arise near the base of the skull, so symptoms may be caused when they begin to affect the nearby cranial nerves and the brainstem.

Symptoms may include, but are not limited to

As with all brain tumors, imaging studies are essential in the diagnosis of chordomas and chondrosarcomas. Because these tumors often involve bony structures, Computed Tomography (CT) scans are used to assess the degree of bony involvement at the skull base.

Magnetic Resonance Imaging (MRI) scans also are used to distinguish the tumor from the sensitive structures of the skull base. For both CT’s & MRI’s, an agent that provides contrast in the image is administered intravenously so neurosurgeons can visualize the tumor against the normal brain in the background.

In some cases, neurosurgeons may employ an MRI scan with frameless stereotactic guidance. For this study, a contrast MRI is performed after special markers (called fiducials) are placed on the patient’s scalp. The fiducials are processed by a computer, which calculates the location of the tumor and creates a three-dimensional reconstruction. This image then is used at the time of surgery to help locate the tumor precisely, maximize tumor removal, and minimize injury to the surrounding brain.

Cerebral Angiography, which shows arteries and vascular structures around the tumor may also be used. This imaging study can help direct the surgical approach to the tumor by showing which blood vessels are affected by the tumor.

Chordomas and chondrosarcomas can be distinguished from one another by location

and through examination under a microscope.

Treatment for both chordomas and chondrosarcomas includes complete surgical excision of the tumor with radiation therapy as a follow-up.

In addition, Stereotactic Radiosurgery may be used as an adjunct to surgery.

Because these tumors have a tendency to recur and recurrence is a major cause of death, complete tumor removal is important.

Complete tumor removal, which may involve combined or multiple surgical procedures or approaches, may be complicated by the location of the tumors and their involvement with important structures.

For these reasons chordomas and chondrosarcomas are known as some of the most difficult benign tumors to treat. 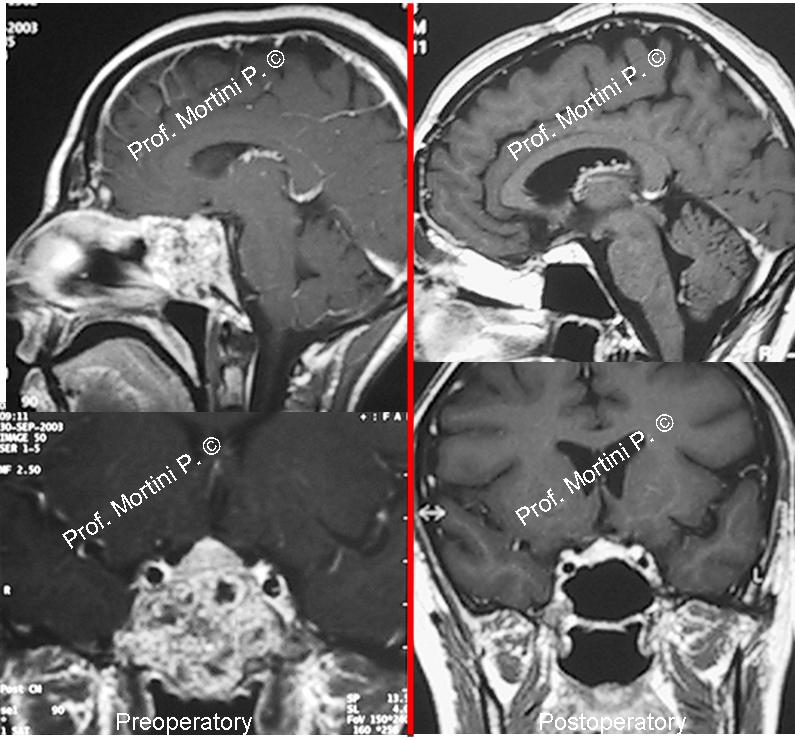