The normal skull consists of several plates of bone that are separated by sutures. The sutures (fibrous joints) are found between the bony plates in the head. As the infant grows and develops, the sutures close and the bones fuse together, forming a solid piece of bone, called the skull.

Craniosynostosis is a condition in which the sutures close too early, causing problems with normal brain and skull growth. Premature closure of the sutures may also cause the pressure inside of the head to increase and the skull or facial bones to change from a normal, symmetrical appearance.

In some families, craniosynostosis is inherited.

Craniosynostosis is a feature of many different genetic syndromes that have a variety of inheritance patterns and chances for reoccurrence, depending on the specific syndrome present.

It is important for the child as well as family members to be examined carefully for signs of a syndromic cause (inherited genetic disorder) of craniosynostosis such as limb defects, ear abnormalities, or cardiovascular malformations.

What are the different types of craniosynostosis?

There are numerous types of craniosynostosis. Different names are given to the various types, depending on which suture, or sutures, are involved, including the following:

• Plagiocephaly involves fusion of either the right or left side of the coronal suture thatruns from ear to ear. This is called coronal synostosis and it causes the normal forehead and the brow to stop growing.

Unilateral lambdoidal suture synostosis may cause plagiocephaly, as well.

Deformational (or positional) plagiocephaly refers to the misshapen (asymmetrical) head from repeated pressure to the same area of the head. This is not a true synostosis. It can result when the part of the skull (occipital bone) that is dependent (in one position) flattens out due to pressure, as when sleeping on that part of the skull.

• Trigonocephaly is a fusion of the metopic (forehead) suture. This suture runs from the top of the head down the middle of the forehead, toward the nose. Early closure of this suture may result in a prominent ridge running down the forehead. Sometimes, the forehead looks quite pointed, like a triangle, with closely placed eyes (hypotelorism).

• Scaphocephaly is an early closure of fusion of the sagittal suture. This is the most common type of synostosis. This suture runs front to back, down the middle of the top of the head. This fusion causes a long, narrow skull. The skull is long from front to back and narrow from ear to ear.

What are the symptoms of craniosynostosis?

In infants with this condition, changes in the shape of the head and face may be noticeable and are generally the first and only symptom. The appearance of the child’s face may not be the same when compared to the other side.

Another sign is small or absent fontanelle. Less commonly, synostosis can cause increased pressure within the skull. This is especially true when multiple cranial sutures are fused prematurely. In infants with this condition, changes in the shape of the head and face may be noticeable and are generally the first and only symptom. The appearance of the child’s face may not be the same when compared to the other side.

Symptoms of increased pressure in the skull include:

The symptoms of craniosynostosis may resemble other conditions or medical problems. Always consult your child’s doctor for a complette diagnosis.

Craniosynostosis may be congenital (present at birth) or may be observed later. The diagnosis is made after a thorough physical examination with a complete prenatal and birth history of the child and a family history of craniosynostosis or other head or face abnormalities.

Information about developmental milestones may be useful since craniosynostosis can be associated with other developmental delay.

A measurement of the circumference of your child’s head is taken and plotted on a graph to identify normal and abnormal ranges.

In addition diagnostic tests that may be performed to confirm the diagnosis of craniosynostosis:

• X-rays of the head.
• Computed Tomography Scan (also called a CT or CAT scan) of the head.

Specific treatment for craniosynostosis will be determined based, among others, on:

Surgery is typically the recommended treatment. to reduce the pressure in the head and correct the deformities of the face and skull bones.

Details of operation, including timing, post-op scenario including possibility of complications, therapies and others will be discussed with the doctor. 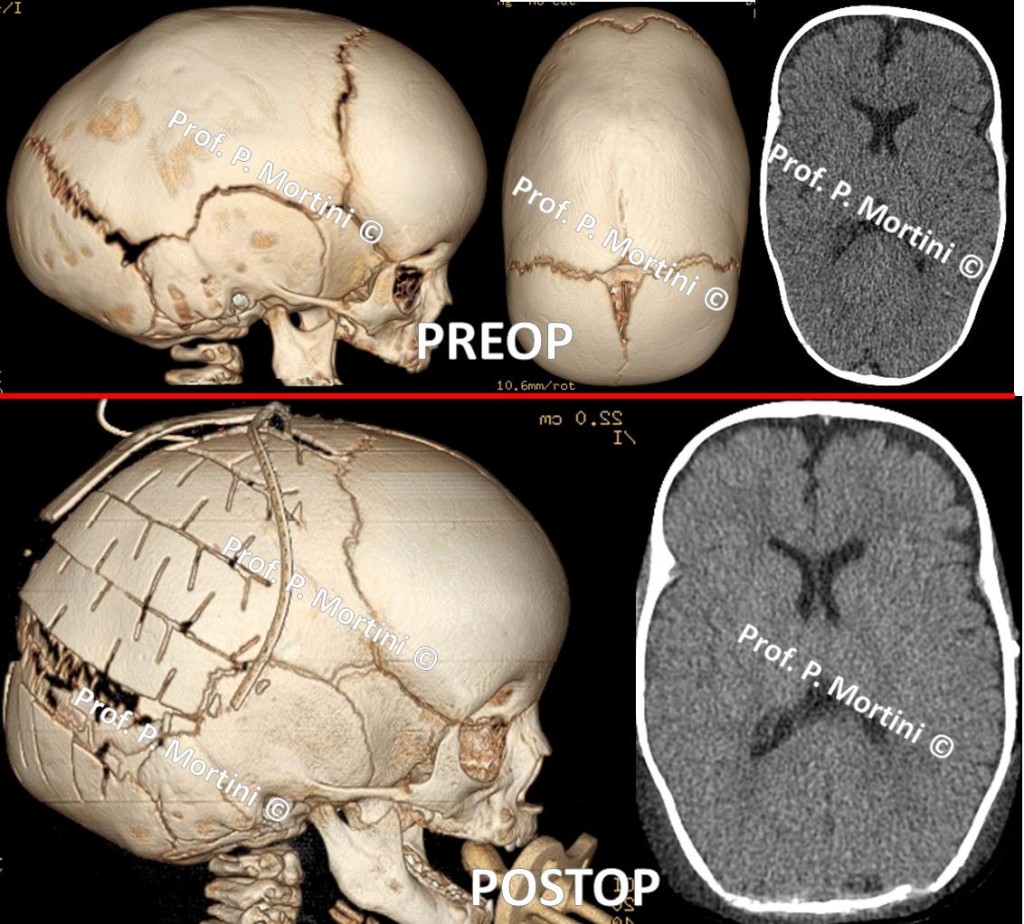