A vascular malformation is an abnormal collection or tangle of blood vessels. The malformations restrict or alter blood flow and are associated with the degeneration of neurons.

In some such tangles, arteries, which supply oxygen-rich blood to tissue, are interconnected with veins, which move oxygen-depleted blood back to the heart and lungs.

The capillaries, the tiny vessels that deliver oxygen to cells and usually separate arteries from veins, are absent in these structures. Malformations with such direct artery-to-vein connections are called arteriovenous malformations (AVMs).

The vast majority of spinal AVMs will cause neurological symptoms, such as

A percentage of these AVMs (10 to 20 percent) will cause a sudden onset of symptoms rather than a slow progression. In these cases, a vessel may have burst, causing bleeding (a hemorrhage) and resulting in

Magnetic Resonance Imaging (MRI) can be used to identify the malformation, and then spinal angiography, a test in which a tracer is injected to make the blood flow appear on an x-ray, to assess the structure of the malformation.

In some cases, patients are treated with endovascular embolization, a procedure that reduces or obliterates the AVM. This technique involves passing tiny a catheter, or tube, into the vessels feeding into the AVM, where the catheter releases a glue-like material that can seal off sections, or in some cases all, of the malformation.

However, if the AVM already has hemorrhaged, or if it is causing a deleterious effect on the whole spinal cord, surgery may be necessary.

Once the extent and blood supply of a malformation is identified, neurosurgeons can attempt to remove the malformation to restore the normal blood flow.

Spinal AVMs are complex lesions, and should be addressed at major centers with experts experienced in their treatment. 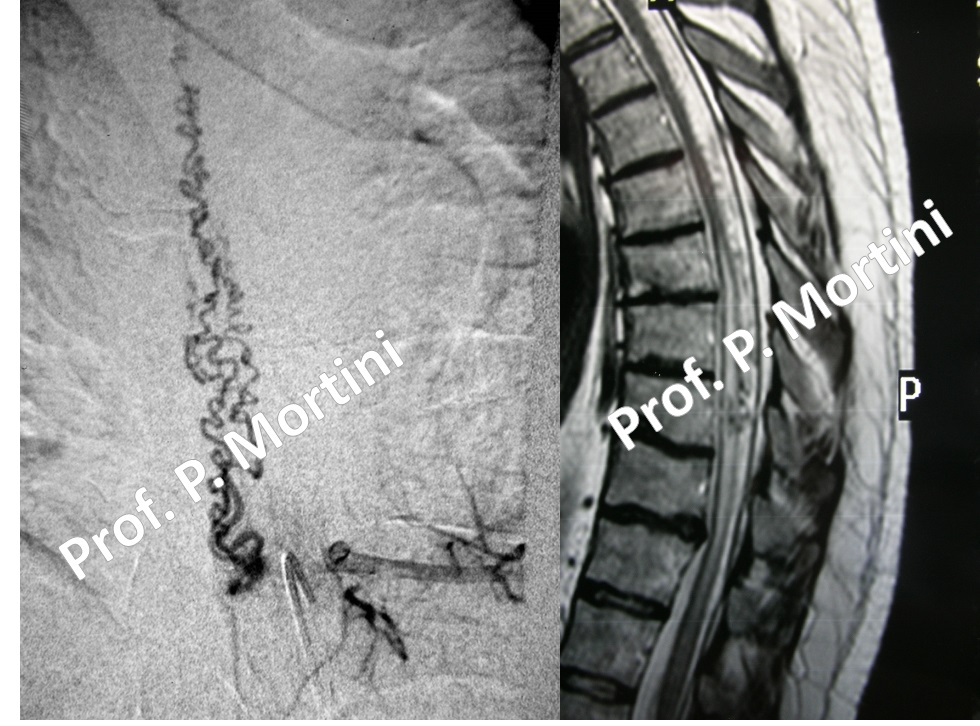